Movie actress Meg Ryan inspired the name for this scarf. I have always enjoyed the romance comedies Meg has acted in, especially Sleepless in Seattle. For some unexplainable reason, when I was creating these scarves, I could not get her style out of my mind. I picture her wrapping one of these extra long scarves around her neck and running up to the top of the Empire State Building looking for her True Love.

Each scarf is pieced together with small strips of torn fabric, and then lovingly decorated trims, yarns, applique, buttons, lace, charms, or whatever else fits the theme. No two are identical.

After the entire length of scarf is covered for the desired look, the scarf is washed and dried. It comes out torn up and distressed. The strings are trimmed back, keeping some of them for its unique character.

It can be worn hung around the neck, hanging long and straight for a dramatic look and to show off the piecework. It even looks fabulous belted.  The most common way to wear the Meg Scarf is to fold in half lengthwise and wrap around the neck once or twice.

You get to decide how you want to style this item for your own individual look.

Scarves Range is prices starting at $45.00. Special and Custom orders are available.

ArtSquare Totes as Featured in The Detroit News- Jocelyn Brown's Article on January 24, 2014.

Totes can be custom made with your choice of fabrics and color theme. Order yours today!

As a young girl growing up in Lincoln Park, Cheryl Zemke dreamed of becoming a fashion designer, but despite her passion for sewing, her wish was often met with discouraging words.

“People said you had to be some place like New York or London in order to go into fashion,” recalls Zemke. “I didn’t come from a wealthy family, so I kept talking myself out of it.”

But some things in life are just meant to be. Zemke earned a bachelor’s degree in marketing from Lawrence Tech University and an associate’s degree in merchandising management from the International Academy of Design & Technology in Tampa, Fla. She now owns C. Creations Custom Sewing and Design in Riverview, for which she created her own private label — C3 (Creative Clothing Collection).

She has a number of fashion design awards to her credit. For the Passion for Fashion contest, hosted annually by the American Sewing Expo in Novi, she took first place in 2012, second place in 2011, the People’s Choice Award in 2010 and third place People’s Choice Award in 2009. Prior to winning awards, she worked two years as a quality (garment) control specialist for the Home Shopping Network during a 10-year stay in Florida and managed a local JoAnn Fabric and Crafts Store.

“I guess God keeps on giving me these opportunities. I resigned in 2002 from JoAnn Fabrics and started this (company), and it’s been going strong ever since,” says Zemke, a member of the American Sewing Guild, Allen Park Sewing Guild, Downriver and Detroit Business Association, Cultural Partner-Downriver Council for the Arts, and Common Threads Professional Group.

Many of the things she makes and designs — from swing vests to fabric collage totes (like the one featured here) — are inspired by visits to the Detroit Institute of Arts and her family’s history, which stems from England. She says, “I studied the whole entire monarchy and got inspired by all the designs, but I think a lot of designers do that.”

Purchase a Custom made Novel-T Scarf with Your Team or favorite colors.

C. Creations carries a large assortment of scarves in different fabrics, colors, styles, and prints. Please ask is you are searching for a particular type. If we don't have we can create one specially for you. 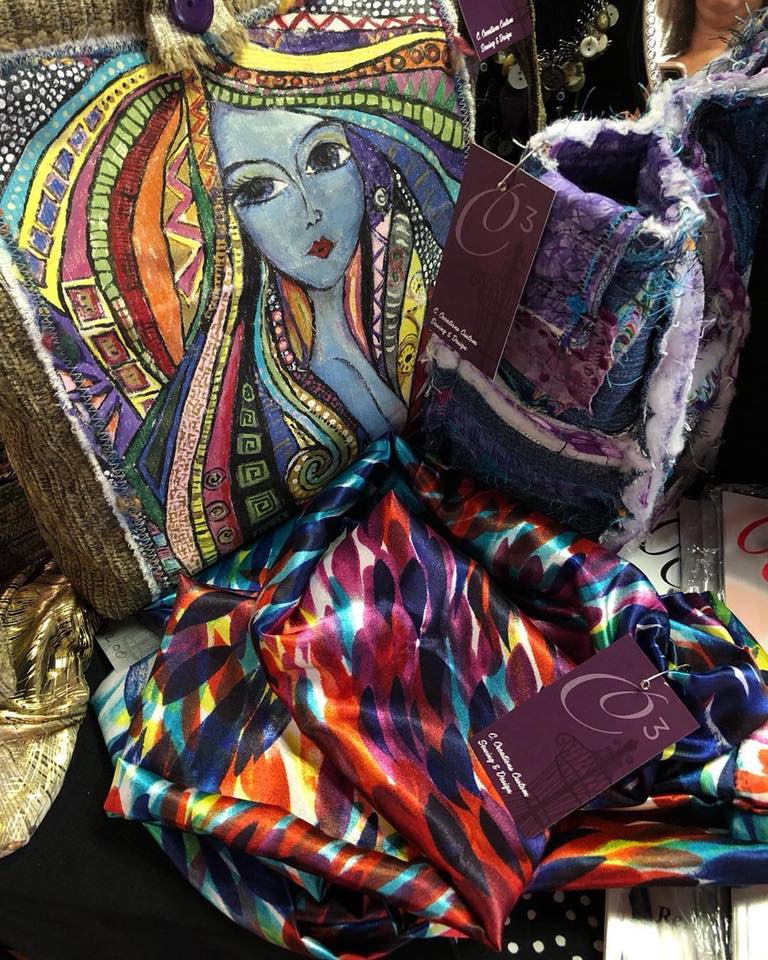